The past year has been a busy one filled with milestones and acquisitions by UniCarriers Americas Corporation (UCA) and parent company UniCarriers Corporation. Here is a quick glance at a few of the highlights of news regarding UniCarriers forklift from the previous twelve months.

This marks the first factory-owned forklift dealership for UniCarriers Americas

UCA and NEIT have a long, successful relationship, beginning in 1978 when NEIT became an authorized member of the Nissan Forklift dealer network. NEIT currently has 84 employees and covers a territory of six states, Massachusetts, Vermont, New Hampshire, Maine, Connecticut and Rhode Island, NEIT is headquartered in Woburn, MA, and has branches in Wallingford, CT, and Saco, ME.

Over the years, NEIT has achieved numerous accolades that include gold level Service Excellence Program awards for 20 consecutive years, and honors as a distinguished Nissan Forklift Nine winner 21 times. The opportunity to purchase NEIT presented itself when it’s family owners decided to transition out of ownership and approached UCA leadership. It was a perfect opportunity for both parties.

UniCarriers feels a factory-owned dealership will provide them with an added perspective of customer and industry expectations.
With this knowledge, UniCarriers plans to create new leasing and purchase programs and make adjustments in their business practices that will benefit both the customer and the entire dealer network.

LED headlights have been a popular option for customers on Platinum II and GO4 series orders. LED lights are more durable, offer greater visibility, deliver a longer service life and are suited for high-vibration applications.

Another feature introduced was the Parking Brake/Transmission interlock system.  The new systems inhibit the truck from being driven while the parking brake is engaged. This will protect brakes and transmission from possible damage and can reduce service costs incurred by premature brake wear or an overheated transmission.

The final new standard feature addition is the LPMax Enhanced Low LP Fuel Level Sensor.  The LPMax system provides a low LP fuel level warning to the operator an average of 8 minutes before the LP tank is empty.  This allows the forklift operator plenty of time to drive to the nearest LP tank supply or refill station before the lift runs out of fuel.  The LPMax system helps with the safe operation of the equipment, while significantly reducing downtime and improving fleet productivity.

As we previously covered in detail, UCA introduced a new standard limited warranty that covers two years unlimited hours on all Class I, IV, and V forklifts ordered on or after November 1, 2014. The new warranty is the best warranty offered in the industry.

The new standard warranty on UniCarriers forklifts is also transferable after one year, with approval based on oil analysis and review of service records. There are no SIC code limitations for the new warranty. The new standard warranty will have the same exclusions and limitations for wear parts, normal service and parts that are warranted by the original manufacturer.

December 2014 marked the third anniversary of UniCarriers Corporation. UniCarriers was established in 2011, with the merger of Hitachi and Nissan Forklift Co., and the successful integration of TCM Corporation. 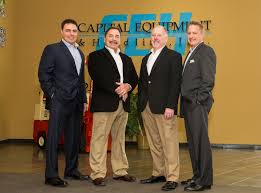 CEH is a well-respected material handling dealership with a proven track record of strong sales performance and customer-focused support for 30 years. It has historically delivered superior growth and account retention. Capital Equipment & Handling has earned various honors, including recognition as a Nissan Forklift Nine winner the past five consecutive years, and seven times overall. Capital Equipment is a full-service material handling dealer who not only sales new and used UniCarriers forklift equipment but offers aftermarket service and parts, as well as forklift operator training.

All four of the factory-owned dealership’s sites will operate under the management of Gary Hansen who has been with the dealership for 30 years. Gary reports to James J. Radous III, the executive vice president, sales, at UCA, who in August 2014, took on the added responsibility for leadership of UCA’s new retail operations channel. Jerry Ziglinkski will continue as branch manager for CEH’s Fox Valley location.

NIEM was established in 1995 in Marengo, Ill. Under the new ownership, GTCA will continue to assemble and distribute the K21 and K25 engines in Marengo as part of the UniCarriers family.

NIEM supplies engines for several forklift models produced by UniCarriers Americas, as well as to customers throughout the Americas. This transaction represents one of the several phases of UniCarriers Americas’ overall strategy to transfer the Nissan industrial engine business into the UniCarriers forklift family, securing one of its product’s key competitive technologies, and preparing the organization for future redesigns and enhancements to maintain the K21 and K25 engines’ top position in the market.

“The business of manufacturing Nissan forklift engines is an important part of our heritage,” said Anthony Salgado, president of UniCarriers Americas Corporation. “It represents the heart and soul of our main product line.”

GCTA will work in cooperation with Global Components Technologies (GCT) in Japan, which is a wholly owned subsidiary of the $1.9 billion global company, UniCarriers Corporation, focused on designing, manufacturing and distributing gas and diesel engine assemblies, transmissions and attachments for UniCarriers products, aftermarket support and customers worldwide.

Standard features of the GO4 Series and its new ZD30 engine include: 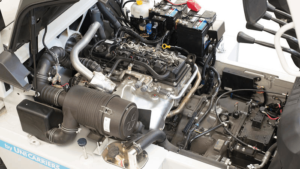 UniCarriers claims the engine delivers dependable cold-weather starts as well as enhanced reliability. The G04 truck has an oversized, heavy-duty differential and drivetrain, as well as thick mast rails.

In January of this year, GCT began production at the Konosu engine plant outside of Tokyo. The new GCT plant will also serve as the primary production site for the next generation of K21 and K25 engines. The new Tier 4-compliant diesel engines will be produced beginning in early 2016. 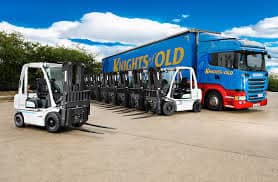 Knights of Old has signed an exclusive contract making UniCarriers its sole supplier of industrial indoor and outdoor forklift trucks.

Another signal of UniCarriers forklifts growing global strength, The Knights of Old Group, one of the largest privately-owned logistics companies in the Midlands, has signed a new contract that sees UniCarriers become the company’s sole supplier of industrial indoor and outdoor lift trucks.

Up until now, the company’s forklift truck fleet has been split between internal and external material handling equipment providers.

Kelvin Gingell, Knights of Old’s Group Logistics Director, said: “We have a long working relationship with UniCarriers (formerly Atlet). We went through a robust tender process, giving our operators the chance to test drive the potential new equipment and benchmark against competitors.

“The operators were able to sit on different trucks and see what they liked and fed that back to the management team who were making the ultimate decision.

“UniCarriers have been very proactive in their approach to the new contracts and have considered the long-term relationship. They have listened to our requirements and offered a solution that is backed up with first class service engineers.

“We have a flexible agreement that enables us to swap out kit throughout the term of the contract depending on our ever-evolving business requirements.”

That’s a quick recap of some of the national and international events within UniCarrier Corporation and their dealer network. I’ll keep you updated on new happenings and news as they become available.