A host of new safety and performance features as standard highlight the production of a completely redesigned range of 3,000 lb. to 5,000 lb. capacity electric Doosan forklifts. 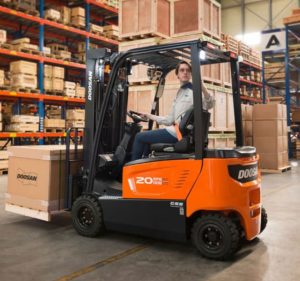 The new 7-Series is being built at the company’s state-of-the-art production facility in South Korea.  The expanded range, now including long wheelbase models with increased battery capacity.

Doosan now has the most modern and one of the widest ranges of electric counter-balance trucks to suit any electric truck application. The latest technology is now a new standard feature on the 7-Series including finger-tip controls, and an automatic electric parking brake.

An advanced control system protected to IP65 rating gives the new Doosan 7-Series electric forklifts even better protection against water, dust and damp sites where previously only IC engine trucks would be suitable.

Other highlights include LED spotlights for better illumination but using less power and vastly reducing bulb failures, upgraded protection packages on the motors and one of the most comfortable seats on the market.

“In addition to the new standard features, the range also features an increased steer angle, especially on the 4-wheel models now turning to 86-degrees, which gives a superb turning radius. Combine these new features with virtually maintenance-free oil-cooled disc brakes, Active Energy Control with regenerative braking, which feeds power back into the battery, and our Operator Sensing System for ultimate driver safety, and you have a package which is second to none,” stated Watson. 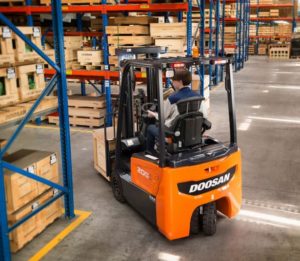 The 3,000 lb. to 5,000 lb. capacity models are now available, with the new 7-series larger capacity electric models going into production later this year. The existing 5-series electric forklifts to 10,000 lb. capacity continues to be available.

Doosan Industrial Vehicle America Corporation (DIVAC) is headquartered in a 170,000 square foot facility in Suwanee, Georgia, and is home to its Sales, Marketing, Parts, and Warehousing departments. The U.S. headquarters also houses a state-of-the-art parts operation supplying over 25,000 line items to support its affiliate Groups.

Additionally, DIVAC conducts Product and Service Support, Machine Order, and Traffic and Logistics function from its regional office in Warrensville Heights, Ohio (a suburb of Cleveland). This facility also boasts a 26,500 square foot forklift warehouse that serves as the main distribution point for all Doosan units brought into North America.